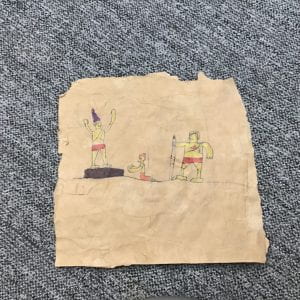 One day a Miracle happened. I thought my eyes were playing tricks on me. Before I get into that, let me introduce myself. My name is Nedjes and I am a peasant. Peasants aren’t that important but life is still good. I am a builder not a farmer. I hate farming. I once had to help my friend with farming and I hated it.

Now I was in the middle of helping a farmer build a shaduf near the Nile River. I build shaduf before so now it is but the person I was working with kept forgetting what to do.

“Ok we just need another small tree” I said.

“We do” said the farmer in confused voice.

“Yes we do”I yelled in a come on voice.

“I don’t know” argued the farmer.

At this point I thought I should just leave. I ignored the screams of the farmer for me to get back here. I walked away till I saw some soldiers about three all boys. All of they were dressed in shorts no shirts. 1 had a spear slung over his shoulder. Another had a knife on his belt and the last had a sword and knife on his belt.

One saw me coming and greeted me with“Well, Well, Well, some more prey”.

At that moment I realized they were thieves dressed to look like soldiers. Also at the same moment I tried to run away. I didn’t get very far. At some point I tripped and fell. I got up but I was surrounded by those boys from just a second ago. They unsheathed their weapons and got ready to attack.

One with a sword then said “you are not getting out of this alive.”

I didn’t think I was getting out of this alive ether but right before they charged someone said “STOP” in a very manly voice. I turned to look and saw the pharaoh Palermo. He looked like the richest.

Welcome to your brand new blog at Edublogs!

To get started, simply visit your blog’s dashboard, edit or delete this post and check out all the other options available to you.

We can walk you through step-by-step in our guide to getting started with your blog.